Over the weekend we had a blast taking our kids to the Venardos Circus in Tacoma. The circus was entertaining for both children and adults and all of us thoroughly enjoyed the show.

Kevin Venardos started his circus back in 2014 in Southern California. Since then, it’s grown quite a bit and now performs around the country. At each show, he encourages guests to follow their own dream, just as he has (#LiveYourCircusDream). 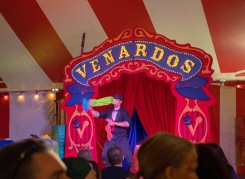 The whole circus is very well done. When we arrived, we walked up to a traditional red and white striped tent and we were greeted by one of the performers. Standard tickets give you first come first serve style seating (with VIP front row seats for an extra cost) so when we arrived about a half hour early, we sat in the 5th row and could still see the stage pretty well.

She was seriously amazing!

I loved how they had a bit of pre-show entertainment going on, which included inviting guests to come on stage to learn how to juggle, and the opportunity to get their face painted. Concessions included pretzels, popcorn, snow cones, cotton candy, and lemonade (it’s a completely peanut free zone). We bought a bucket of popcorn and a lemonade for all of us to share and both tasted great! 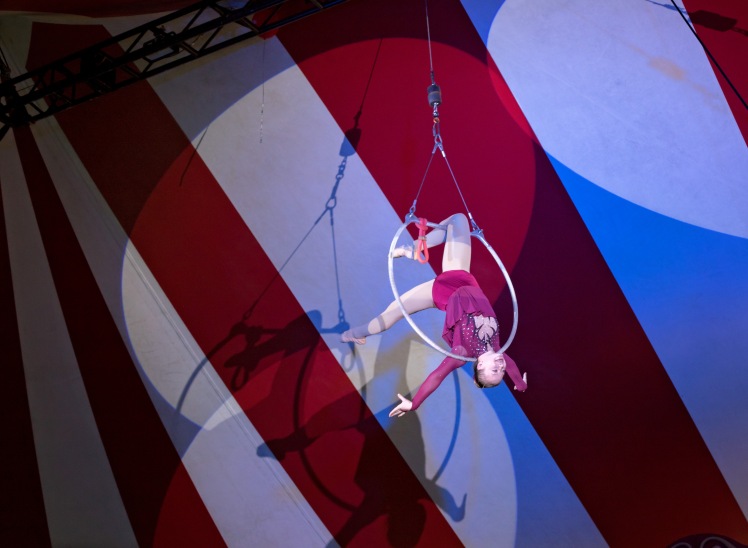 The show itself was excellent! The ringmaster, Kevin, came out and introduced his circus in a Broadway style song (it totally reminded me of The Greatest Showman) and then several acts followed including a family of acrobats, a fantastic clown, a mother/son juggling act and more! Our girls were captivated the entire time with smiles on their faces. 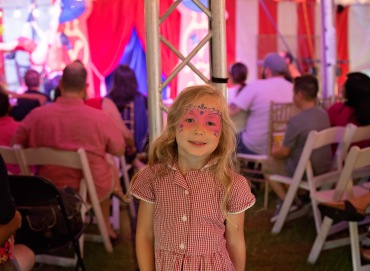 Both girls loved their face paint

About two thirds of the way in, there was an intermission. Aaron took the girls to get their face painted (the girls were in awe of how pretty theirs each turned out) and they both excitedly chatted about which acts they loved the most.

Then, the show continued with more acrobatic acts and ended with another Broadway style song/dance. Afterwards, guests were invited to come up on stage to get a photo with the circus performers if they liked. One unique thing about Venardos Circus is that there are no animals at all. I appreciated that and was glad to not have proper animal treatment as a worry during the show. I also loved the traditional look of everything with the red and white striped tent and how excited our girls were walking up to it.

Overall, we had a really great time and I would definitely recommend a visit. Each show is about 1.5 hours long and will easily keep both children and adults entertained. This was their second year doing shows in Tacoma, WA and this week they’re up in Lake Stevens, WA. Later this year, they’ll also be in Wisconsin, Virginia, and North Carolina so make sure to check their website often to see if they’ll be at a city near you.

A special “thank you” to Venardos Circus for hosting us for such a spectacular evening.

2 thoughts on “The Venardos Circus”