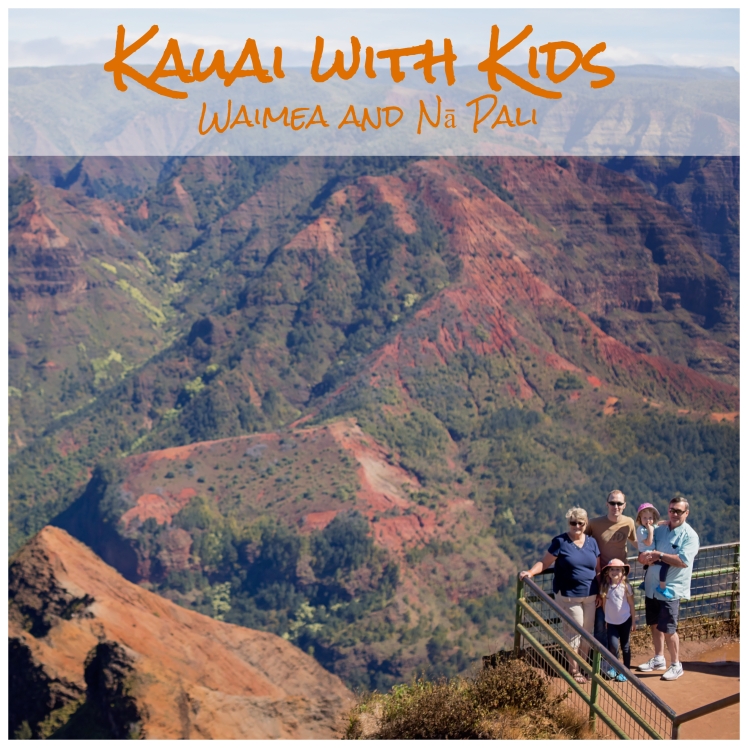 I really loved our time in Kauai. We had a great mix of days at the beach/hotel pool along with some really fun outings around the island. One fun activity that was recommended to us by members of the Bebe Voyage Community on Facebook, was to download an app called Shaka Guide. The app has several driving tours that sync up with the GPS on your phone. We tried a couple while we were on our trip and really enjoyed them (even our oldest liked listening to them as well). One that we followed took us up through Waimea and over to a couple lookouts over the Na Pali coast.

Just us and the wild chickens

Standing on top of the ruins

One quirky stop that our app recommended was the ruins of an old Russian fort. Very little is left today (besides all the wild chickens, of course  😉), but you can climb up where it used to be and our app itself told us all about the little story behind the fort.

One of our first stops in the canyon was the coolest waterfall surrounded by tons of red dirt. The dirt is actually full of iron and is oxidizing, giving it a vibrant red color. The waterfall is easy to spot along the road with a few spots to pull over and park so you can check it out. Make sure to cross the street carefully (the waterfall will be on your left as you drive up the canyon) and then it’s a fairly easy walk up to the falls itself.

There are tons of hikes in Waimea Canyon! Being super pregnant and having two little ones definitely limited what we could do though. On our original drive up the canyon, we actually left a bit late and weren’t quite as prepared as we should have been (the only food you’ll find is at a little fruit stand at the main canyon lookout), so we skipped several of the recommended stops to make sure we were back in town in time for a late lunch. A couple days later, the girls spent a nice morning with their grandparents while Aaron and I finished up our Shaka Guide tour on our own. This time around, we made sure to stop at the Iliau Nature Loop, a quick .3 mile walk just past the red dirt waterfall. It had beautiful views of the canyon! It was definitely an easy walk and one that our girls would have also enjoyed. There were plenty of little plaques describing the different plants and while not much was in bloom during our visit in early February, it sounded like it would have lots of flowers in the late Spring/early Summer.

The main viewing point of the canyon is Waimea Canyon Lookout. This is where you can also buy fresh fruit for a snack and freshen up in the public bathrooms. The views here are fantastic! One can really see why this is considered the “Grand Canyon” of Hawaii. Beautiful waterfalls can be spotted in the distance and the red dirt is striking next to all the green. Of course, while we didn’t try it, you can also view the canyon by helicopter.

When we were with the rest of our family, we turned around after the main lookout and headed back in town for lunch (we had some fantastic shrimp). However, when Aaron and I finished the tour a few days later, we drove another 30ish minutes until we reached Kalalau Lookout and then over to Pu’u O Kila Lookout, both of which offered stunning views of the Na Pali coast!

According to our Shaka Guide, a local legend says that a giant named Puni would carve the mountains while waiting for his friends, the menehune, to visit him. Unfortunately, the giant died before he finished and so now it’s up to visitors to look at the mountains to see what they think Puni was carving.

The lookout also boasts that it is one of the wettest places on on Earth (although, ironically enough, it was incredibly sunny on our visit). We really enjoyed the views, although parents should be aware that there are areas of the viewpoint that are not fenced at all and children would need to be closely watched. 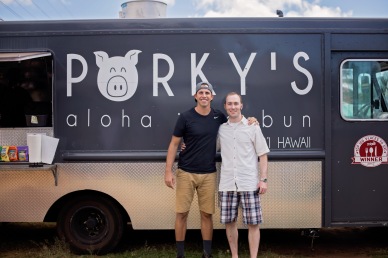 Pu’u O Kila lookout is the end of the road so one must turn around at this point. Both drives through the canyon ended with us grabbing lunch in Waimea. When it was just Aaron and I, I grabbed Thai food and Aaron grabbed a Beef Dog from Porky’s. While my Thai food was perfectly acceptable, Aaron definitely won for best meal in Waimea with Porky’s! It was fantastic and I definitely recommend stopping there for a bite to eat! There are also a few vendors right in that same area there selling different jewelry and things that were neat to check out (we ended up getting a necklace for me and my in-laws got us a cute quilt for our baby on the way).

Using a driving tour app was definitely a unique way to check out part of the island. We loved hearing the history and legends as we drove along and there were plenty of stops where we could stretch our legs and see some sights. Waimea was a beautiful area and I highly recommend visiting it!

4 thoughts on “Kauai with Kids: Waimea and Nā Pali”