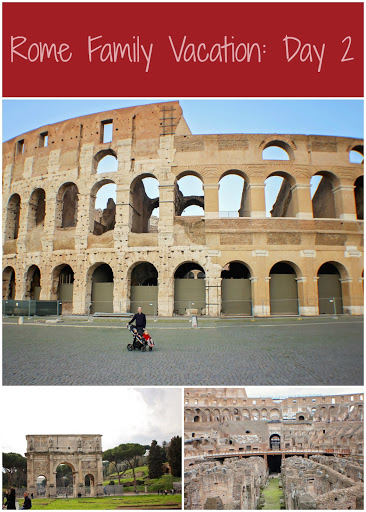 Our second day in Rome (and first full-day there) was spent at different Ancient Roman sites (to read about our first day, click here).
Our itinerary went as follows:
Hop-on Hop-off Bus Tour on our way to the Colosseum
Colosseum, Palatine Hill, and Roman Forum
Mouth of Truth

We had a quick breakfast at our apartment and then headed out around 9 am to catch the bus. Our girls wake up early and Adeline usually takes a morning nap around 9ish, so this was a good time for us.

We got our bus tour tickets online with City Sightseeing Hop-on Hop-off. It took us a little bit to find the closest hop on spot, but it was nice once we got on the bus. London and I sat on the top level while Aaron stayed below with our sleeping baby.

The tour gave out headphones that would plug into a pre-recorded tour. London had fun listening to it (it played classical music in between the talking) and it gave some neat facts.

We got the 48 hour ticket so we could use it again the next day. I think if we were to do it again, we would either not bother at all with the bus, or just get a 24 hour ticket. We only used the Hop-on bus once each day for less than an hour so it ended up being a bit expensive compared to the usage we got out of it.

We got off the bus at the Colosseum. Luckily, we had bought our tickets online and didn’t have to wait in much of a line to pick them up. We decided to do a picnic on Palatine Hill first before seeing the Forum or Colosseum.
According to legend, Palatine Hill was where Romulus and Remus were found by the she-wolf who took care of them until a shepherd found them and raised them.
It is the most center part of the seven hills and one of the most ancient parts of Rome.

From Palatine Hill, we walked down and into the Roman Forum.

One thing that we did before we left was download a bunch of free Rick Steves walking tours. He has one for the Roman Forum, so we turned it on on both of our phones to listen.

For centuries, the Forum was the center of Rome. Speeches were given, elections were held, and criminals were put on trial all here.

It was in the Forum at the speaker’s platform, that the funeral for Julius Caesar was held and where Antony’s funeral oration was delivered.

It was very easy to picture the Forum back then. Sites have been very well preserved and the audio guide helped to fill in the blanks and to explain everything we saw.
After the Forum, we walked back down to the Colosseum.
Since we had booked our tickets online, there was barely any line to wait in to get inside. 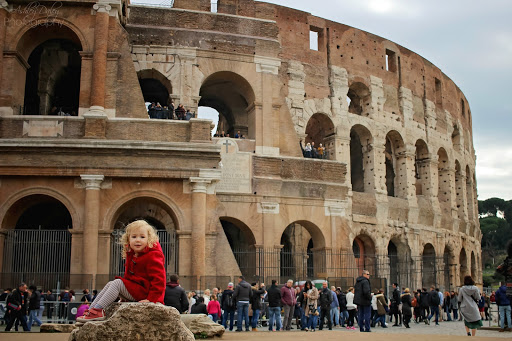 It was amazing seeing the Colosseum and to be able to walk through it! Truly awe-inspiring.
The Colosseum was completed in 80 AD. It’s estimated that it could hold between 50,000 and 80,000 spectators. It was used for Gladiators to fight in, battle reenactments, animal hunts, and more. A few times they actually filled it with water and performed mock sea battles (until they realized it was bad for the foundation)!
Again, we used a free audio tour from Rick Steves that guided us around the site. 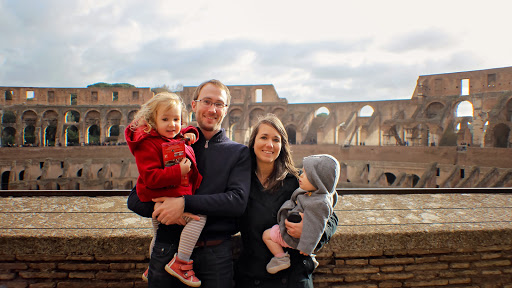 After the Colosseum, we hurried down the street to the Santa Maria church where the Bocca della Verita (known as the Mouth of Truth in english). It closed at 5:50pm so we had to be quick as it was already after 5 when we left the Colosseum. 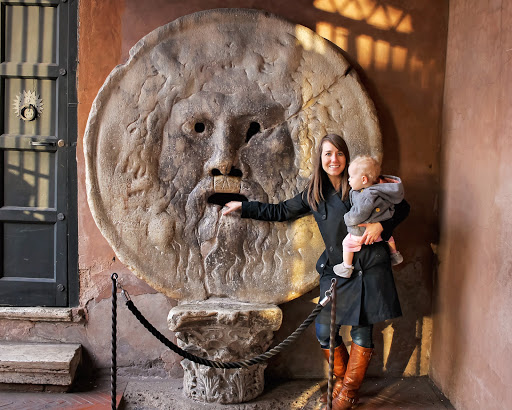 Stay tuned for Day 3: The Trevi Fountain, Pantheon, and more!